10 Inspiring Seniors to Get You Motivated! 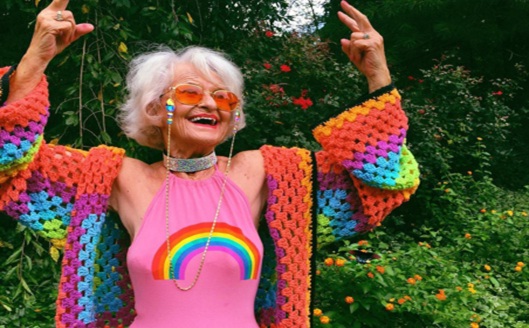 Despite what you’ve heard, today’s generation of seniors are cooler than ever!

Although some of these individuals have been famous for years, allow us to introduce them and their stories to you.

These superstars embody what it means to “age gracefully”- because they have embraced their wisdom and age to continue inspiring people of every age. Here are just a few of these fearless individuals that’ll make you go, “Wow, I want to be like them when I grow up.”

Considered the world’s oldest supermodel, Dell’Orefice has been working as a Vogue model, among other projects, and reshaping previous ideals of beauty (and more recently during her senior years) since 1947. Watch her inspiring story here!

Baddie Winkle embodies what it means to becool. The model and online personality was inspired to collaborate with her grandchildren on a new image after her husband’s death, and soon became an overnight Internet sensation.

Most importantly, she’s hilarious- and you should check out her out on Instagram when you have the chance. Watch Refinery 29’s video to learn more about Baddie’s inspiring overnight success story:

In China, the average age at which most men retire is about 60. Wang Deshun, the 80-year-old model, decided to turn his senior status upside down and take on a new career as one of the world’s oldest runway models. Wang’s infectious, inspiring personality has inspired people of all ages to not only follow their dreams, but also ignore the physical and social barriers that come with aging. Watch Deshun talk about his catwalk debut here:

Sister Madonna Buder is the nun who runs! Sister Buder, also known as the inspiring “Iron Nun”, has participated in over 40 Ironman Triathalons, which is made up of a 2.4 mile swim, 112 mile bike ride and nearly 27 mile run. She even achieved the fastest finishing time for her age group at 82- and has held the record ever since. Did we mention that she’s the star of a recent Nike ad, fittingly titled “Unlimited Youth”, which you can watch here.

The Oldest Living Woman in The World

Born in 1899, Emma Morano is officially the oldest living person in the world. Just about everyone could learn from this amazing woman. Aside from eating a diet rich in protein (she swears to three raw eggs a day), Morano credits the fact that she’s been single since 1938 for her longevity. This ultimate super senior lives in Pallanza, Italy, where she has been enjoying her latest birthday with family and admirers from all over the world.

Hear Morano’s inspiring story in the video below!

He credits the love of his life, Anna Douglas, who is 97, as the key to his longevity. The couple has been dedicated to philanthropy for over 50 years, and have donated a significant portion of their fortune to Douglas Foundation, to fund various scholarships, and hospitals, and especially to foster the Motion Picture & Television Fund and people suffering from Alzheimer’s disease. Age isn’t stopping this Golden Age film icon.

Minoru Saito, a sailing master from Japan officially became the oldest person to sail around the world in 2005 at 77 years old. He continues to sail to this day.

Watch Saito’s Ted Talk here to get inspired and follow your dreams no matter how old you may be.

Iris Apfel may have reached her senior years, but there is no stopping this fashion icon that has taken the world by storm. The designer and model caught the attention of photographers and the top fashion designers after a long career in the textile and interior design industries. She is especially known for her quirky, chunky jewelry and oversized eyeglasses- an Iris signature. You can learn more about her story in the Magnolia Pictures documentary, Iris, which is available on Netflix.

And watch this interview with Iris for a taste of her eclectic-inspired fashion sense:

Also known as the world’s oldest salsa dancer, Jones holds the Guinness World Record for being the oldest acrobatic salsa dancer. If that isn’t cool enough, the super senior recently jumped to fame as one of the most popular contestants on Britain’s Got Talent in 2014. Check out her dance with her partner Nico Espinoza to get inspired. She calls age, “just a mental stage”, and this video is proof of that.

Paddy Jones on Britain’s Got Talent 2014

Jiro Ono legendary status as a sushi chef has inspired countless celebrities and dignitaries like Katy Perry, John Legend and even Barack Obama himself (who called it the best sushi he’s ever had in his life) to visit his kitchen in Ginza, Tokyo. Ono opened his very own restaurant, Sukiyabashi Jiro in 1965 after working in restaurants and as a sushi apprentice since he was seven years old. What an inspiring, and not to mention delicious, life! Check out this clip from Jiro’s documentary, “Jiro Dreams of Sushi”, to get inspired: